Our community organizes grief-rage rituals from time to time as half or full day workshops or as integral parts of our residential Zen and Ecodharma retreats. 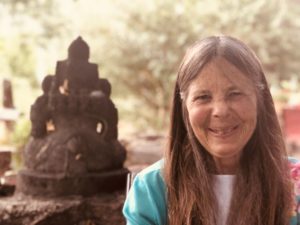 We are deeply influenced by Joanna Macy and “The Work The Reconnects” practices designed to work through our “pain for the world”. However, Kritee’s deepest trust in the need of grief work as well as confidence in facilitating grief-rage rituals comes from her association with Beth Garrigus, whose work with grief began in inner-city 4th grade classrooms many years ago. Inspired and empowered by indigenous elders, Beth has been facilitating “sacred lodges of the heart” at Lama Foundation and elsewhere for the past 30 years, engendering a deep sense of belonging among participants. Healing follows.

Beth is also a humble “carrier of prayer” and “keeper of tears”. She literally carries a box with the names of people and places all over the earth who who are carrying indescribable trauma and grief. Kritee often passes on names of people who are hurting to Beth.