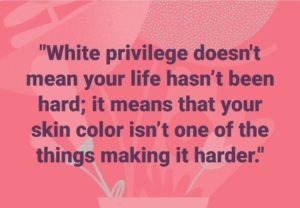 Books, articles and videos which explore how climate emergency intersects with racism and/or give us insight into acknowledging and healing our own (internalized) racism.  No, White supremacy isn’t about supremacists who burn crosses.

This list has been compiled by Kritee (Kanko) after the first Ecodharma gathering of Buddhist leaders in Colorado.

Books
— My Grandmother’s Hands: Racialized Trauma and the Pathways to Mending Our Hearts and Bodies, Resmaa Menakem  *A MUST-read on trauma-healing in white, black & police-bodies*
— Me and White supremacy workbook by Layla Saad
— The New Jim Crow – Book by Michelle Alexander

Videos
— Climate crisis myths: Science, Racism, Ethics & Action: Climate scientist & Zen teacher Kritee Kanko
— Deconstructing White Privilege: A Video by Racial Justice Author and Author of White Fragility Dr. Robin DiAngelo
— Why do we need racial reparations to be a part of climate movement: A short video featuring Morgan Curtis and Anthony Rogers-Wright (Should be watched only after reading Just transition article)
— The first Ian Haney Lopez video is a lecture basically presenting the thesis of his latest book “Merge Left”, and the second video is a discussion with Extinction Rebellion where Ian and Dr. Adam Elliott-Cooper together roast the notion that one can deal with the climate crisis without directly tackling racism. They make an extremely clear argument that however messy it is, white folks need to face racism within and around them. The content of the first video might be important to fully understand the second discussion.