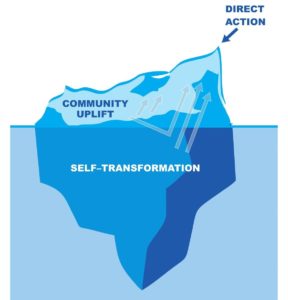 Fierce vulnerability (was called Yet-to-be-named) network is a decentralized and spiritually-rooted interfaith direct action network that aims to shine light on the inseparability of climate and racial justice.  This network has entered a beta testing phase in Fall 2019 such that a few selected teams across the country will get the basic trainings and start actualizing network commitments. Here is an old zine published in 2018 which poetically details our network’s core values. Here is the handbook of the network that was released in 2022.

This network is an assemblage of teams comprised of courageous people who deeply resonate with the content of our network’s zine and handbook, and who feel called and are prepared to uphold the network principles and practices (aka “the DNA”) outlined in our soon-to-be-completed handbook (Release expected in mid 2021). We envision that each team in the network will be surrounded, accompanied and upheld by a wider community of support. We’ve begun to refer to these communities of support as “villages” and we anticipate that they will be comprised of folks who resonate with the spirit and goals of the network but who for whatever reasons don’t feel called to or aren’t ready for the commitment of team membership.

Each team in the network will be autonomous and self-governing. This means that it is up to the teams how they do the work to define and achieve their unique goals within the context of the network’s DNA. Each team will co-hold and co-implement its commitment to engaging in direct action at the intersection of climate justice and racial healing, and to redistributing and/or facilitating the redistribution of resources as a concrete expression of reparations for the impacts of colonization and white supremacy. Obviously the racial makeup of teams will significantly determine the particular ways that teams engage with the network’s core goal of “making reparations real”. 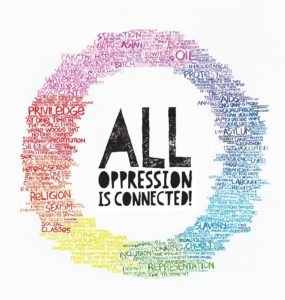 We recognize and openly acknowledge that our twin purpose of engaging in direct action and reparations is but one way – the way to which we feel collectively called – to combat the patriarchal domination system we are embedded in. We celebrate that we’re part of a huge and diverse movement ecosystem, within which others feel called to and are carrying forward other essential work that we’re not undertaking.

After onboarding into the network, teams will be strongly encouraged to follow up with periodic enhancement trainings to strengthen their capacity in a wide range of areas, ranging from group process to direct action strategy to grief-tending to regulating our nervous systems. Teams, which will be made up of a minimum of three people, will be mini-communities of co-creation, shared accountability, and deep trust-building. The network will be counting on our first cohort of teams to beta-test the network DNA through hands-on experimentation, and to offer the feedback we need to strengthen the DNA as our collective experiment unfolds.