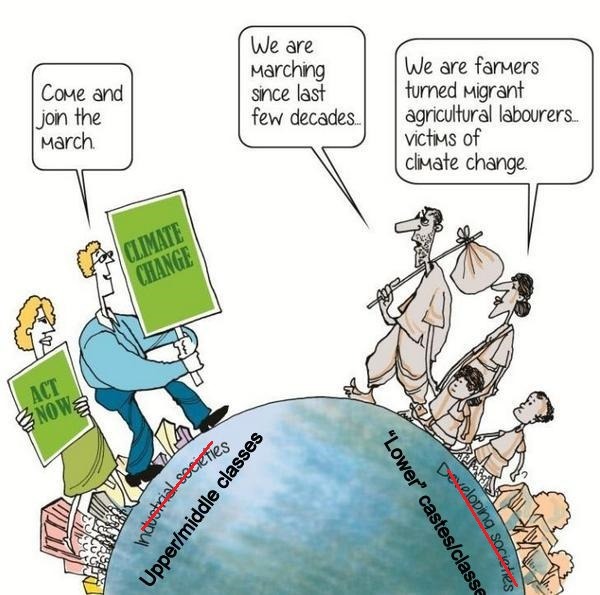 I’m a climate scientist. I know that at the level of physics, emissions of carbon dioxide and other heat-trapping gases have caused our ongoing climate crisis.

(Take a breath. This part was easy.)

I’m also a Buddhist. Indigenous and Eastern traditions including Buddhism are keen to point out that, at a spiritual level, we are not just interconnected or inter-dependent, we are “Inter-being”, a word coined by Buddhist teacher Thich Naht Hanh to describe “You are me and I am you.” When one is in this “Interbeing” state of consciousness, one can’t hurt another being or pollute the waters and soils. There is no “other” – there is only “One body”. So, from a spiritual point of view, our delusional sense of separation from each other, other species and “nature”  is the root cause of the climate crisis.

(You are beautiful. Thank you for reading this. Take another deep breath.)

The point I want to make here is that at a cultural level, white supremacy is a mother of the climate crisis. Some people might ultimately not feel easy with this analogy; they might argue the source of ecological crisis is the oligarchy which benefits from dividing us on the basis of race, caste and religion in dehumanizing ways and white supremacy is only an engine that is fueling the climate crisis. Regardless of analogies or metaphors, white people need to confront racism at all levels.

(How does you body feel right now? Is this line of thinking new for you? Simply heavy? Deep breaths will make it feel a bit better.)

No, white supremacy is not about individual white people and their individual racist intentions, words/epithets or actions. It is not about gun-lovers who clearly dislike BIPOC and seem to have no hesitation about harming BIPOC. White supremacy is  rather about our overall political, cultural and economic system that impacts people of color’s ability to access nutritional food, health services, rental/home away from pollution, jobs as well as their treatment by police. White supremacy is dominance of white culture. European colonialism, or conquest over other continents and indigenous cultures, was a direct result of white supremacy. You need white supremacy to justify both the wars and slow violence brought to people of color and the ecosystems they have lived in harmony with.

(What is the color on the walls on your room? Can you name that and take another breath. Regardless of your identity, I care for you. Our future is tied to each other’s)

Here is the core of my argument: White supremacy (sometimes called European Supremacy) has systematically harmed cultures of black, indigenous and other people of color (BIPOC): the very cultures who knew how to honor the truth of “Interbeing” in their daily lives and how to live in harmony with land and all beings in an ecosystem.  When humans forget how to honor interdependence and Interbeing, they succumb to unsustainable and traumatizing hyper-individualism (i.e., I only need to take care of myself).

The use of word ‘mother’ might feel harsh to some but maybe that is my point: white supremacy has been coo-cooing, cradling, feeding, nurturing, tending and painstakingly defending ecological destruction via the systemic harm it has brought to the people of global majority (BIPOC).

Another way to say this is that the unregulated greed of multinational oil and gas corporations, often touted as a reason of the climate emergency, is rooted in and is a result of centuries of minimization, ridicule and wars brought to BIPOC cultures. The current economic system has been delivered by white supremacy. This out-of-balance economic system that ignores the well-being of humans, non-human animals, and the natural world in favor of higher economic growth (GDP and all the indicators of neoliberal capitalism etc) is rooted in the displacement and obliteration of non-white cultures. The demand that every human work perfectly and endlessly like a machine with impersonal anonymity (opposite of warm connection) to produce more value for the economy with less-than-humane salary or help is also a result of white supremacy.

The mindset of domination that has enslaved, ridiculed, minimized, silenced or made invisible the bodies and/or minds of BIPOC is necessary for cutting trees, our treatment of animals, destroying or polluting ecosystems, extinction of insects, birds and other wildlife, and climate crisis.

(If you are still reading this, please remember to keep doing deep breathing especially long exhalations).

You might ask what about the role of China and other developing countries inhabited by people of color in contributing to climate emergency? Yes, China has more annual greenhouse emissions than the U.S. and Europe today. However, both per person emissions and the cumulative emissions over the last century from developing countries are minuscule as compared to cumulative emissions from US and Europe (see data in this talk on myths surrounding climate). It is also important to remind ourselves that white skinned people don’t exclusively suffer from white supremacy. BIPOC individuals and cultures are increasingly becoming hyper individualist due to shame and trauma of internalized racism. We need to heal and liberate both white and BIPOC minds from impacts of colonialism.

(White supremacy hurts all of us regardless of the color of our skin. Yes you and me. It might kill people of color but it kills hearts/souls of white people)

Black, indigenous and other people of color (BIPOC) around the world are at the frontlines of our ecological crisis even as they are buying into white supremacy: they live near the most polluted sites in this country and often fight the tyranny themselves without help from the privileged world. They suffer the most because of the climate and environmental crisis when they have collectively least contributed towards pollution. They also have ancestral teachings that we need to use to face our collective grief, chaos and trauma. These frontline BIPOC communities have called for return of land and money as reparations for healing racial trauma and the impacts of colonialism. This ask is not “identity politics”. Understanding and honoring this ask can not happen if white environmentalists involved in the climate movement think engaging with racism is “a matter of choice”. Talking about racial healing from past traumas is systematically necessary if we want to heal the historical and ongoing wounds among BIPOC as well as white people AND build the power environmental movement needs.

(When was the last time you drank water and stretched your body? Let us all please take another deep breath).

When some organizations in the climate movement say that their focus is mitigating climate crisis and some other entity should work on racial justice issues, they erase the truth of people of color in this country and the global majority around the world. It is racist to say “Race divides us — so let us focus on what unites us”. We have to design our movement such that we simultaneously solve for climate and racial justice crisis. We do not believe that any climate movement can have a “single focus”.  A single focus heart specialist is trained in the basics of medicine for years before they are allowed to conduct surgery on a human heart. Every physician has to study the complexity of the whole human body before becoming an expert in treating one organ. As one doesn’t do heart surgery without understanding how blood flows in arteries and veins, one can’t work on the climate emergency without acknowledging and facing racism and white supremacy.

(Almost done. I like to sing to myself to calm down my nerves. Or I breathe deeply. Again and again).

A wise, compassionate and wholesome global climate movement will attune itself with the concerns of BIPOC frontline communities and look at white supremacy within the movement. One can’t deal with the climate emergency without facing racism head-on. If you ignore white supremacy, you ignore a fundamental enabler-engine of climate emergency. You forget colonialism, you forget what brought us to this point of ongoing sixth mass extinction. In case that wasn’t obvious, all systems of oppression (including patriarchy and Human supremacy or speciesism) often manifest together, reinforce each other and need to be tackled simultaneously.

I want to end by emphasizing that “composting” trauma (see this article and this video) for both BIPOC and whites as well as being embedded in a sane community, using what I call the “power of belonging” to establish three pillars of sanity, is essential to racial and ecological healing.  We also need accountability to people within and outside our circle of loved ones.  Our climate situation is an emergency but it can’t be solved with a mindset of hurry. We need to be resolute but not hasty. The quest for hyper-efficiency is what brought us to the traumatized state we are in today.  As Dr. Kyle Powys Whyte says, “When you’re dealing with a non-native population that’s trying to save today’s world …urgently, they are not recognizing that there’s a problem with the world they are trying to save. They are actually trying to save… dystopia.”

The single most important thing we can do to face climate emergency is to courageously face white supremacy within and around us — it will be a messy long process but there is nothing less that will do.

I’ve come to deeply understand the relationship of white supremacy with climate crisis through many indigenous and black thinkers/authors including but not limited to Robin Wall Kimmerer, Kyle Powys Whyte, Rev. Lynice Pinkard, Mary Heglar, Asia Dorsey, Adam Elliott-Cooper and Anthony Rogers-Wright. I have also recently been deeply influenced by work of Ian Haney Lopez.

Here is a reading list on how climate crisis and racism are in a “sinister symbiosis” – a phrase I first heard in a talk by Anthony Rogers-Wright.