How do we understand our role in the movement towards a safe, healthy and just planet?

From both an analytical or a spiritual perspective, there can only be one unified movement towards joy, harmony, kindness and justice and away from influence of institutional greed, aggression and ignorance on our ecosystems and their components, our bodies and food, our culture and media, corporations and governments. While some of us might have started with a focus on the intersection between spiritual/sacred practices and activism on behalf of our ongoing ecological crisis, our quest can not be limited to fighting for inter-generational justice for future human generations that will suffer because of our climate or environmental inaction. We have to find ways to include inter-species justice between the human and the more-than-human natural world, as well as harmony and justice between different castes, races, classes, genders and even ideologies of human beings. There are several reasons this has be true. 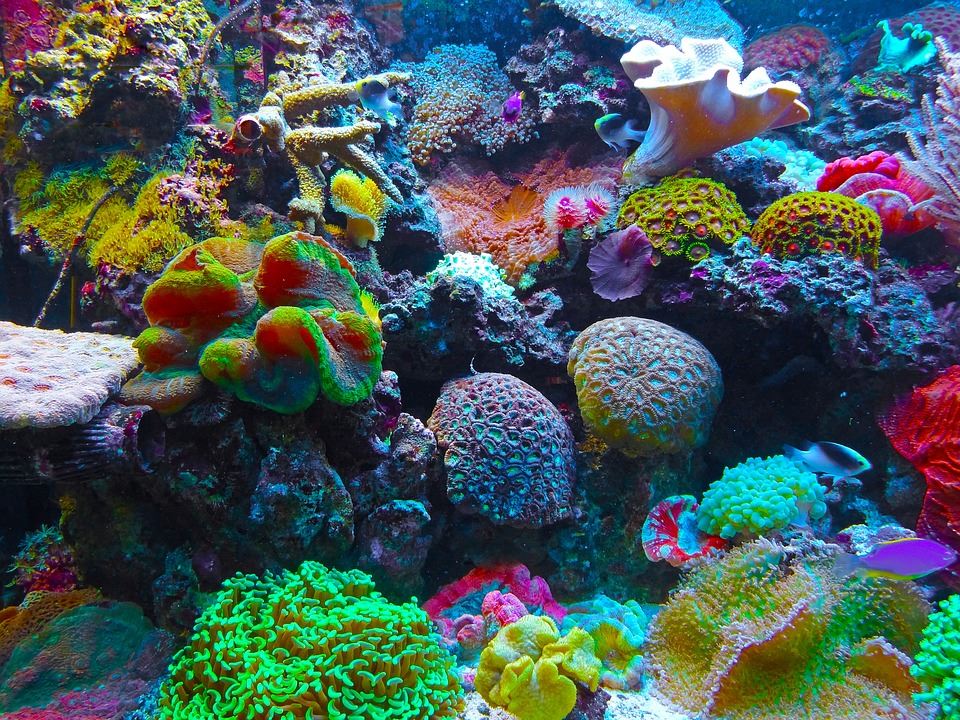 Reef grief: Let us say that we are very saddened by the ongoing destruction of the Great Barrier Reef that is rapidly disappearing due to climate change: loss of tremendous beauty, diversity and such a source of wonder gives us a lot of grief. Let us also say that we are so moved to do something that we decide to reduce our personal footprint of climate-pollutants (greenhouse gases). Yes, being mindful of our ecological footprints (our use and impact on air, water, soil, land use and ultimately climate) is a spiritual practice. Gently observing how many resources we use in our daily lives can also be helpful over time because energy consumption is embedded in everything:  water supply, food production and distribution, construction and operation of our homes and buildings, and manufacturing of products we use in daily lives including our electronic gadgets and toys for our kids. So, here is a detailed list of things we could do in our individual lives to reduce our personal energy footprint. Here is detailed 10 step information on how much we can reduce our families’ footprints including wrt food, products and homes (including as tenants).

Institutional and cultural issues: Reducing our personal footprint is a wonderful spiritual practice and helps us loosen the grip of consumerism and speed on our lifestyles. An average American emits 30,000 Kg (or 65000 lbs) of carbon dioxide in one year as compared to the goal of 1500 Kg (or 3300 lbs) every year that is necessary to meet the global goal of staying below 2 degree Celsius change in temperatures.   Slowly, as we keep implementing new ways to reduce our ecological impacts in our lifestyles and ask less and less from Earth, we can become beacons of hope and role-models for others who think that changing their lifestyle will impoverish their lives and make them unhappy.  Of course, this requires that in addition to working on our lifestyles, we deepen our connection with nature and our deeper layers of mind, and develop a healed interdependent relationship with communities around us. And yet, this work on our personal footprints is not enough to protect our climate from going crazy and protect Great Barrier Reef from completely dying. Change in lifestyles of our family or even a group of families will not put a dent on total global greenhouse gas emissions unless we change millions of people along with us. In the words of a colleague “Our planet will not even notice”!

Scale: For planet to notice, we need to reduce annual emissions by 40,000,000,000,000 Kgs every year not just 30,000 Kg. So, the scale of our ecological problems is not limited to one small lake, one contaminated area (for example, a superfund site) or even one country: it is planetary. And it is increasingly controlled by the actions and decisions of our financial institutions and trans-national corporations that are very powerful today: economically, legally and politically. Some of these institutions certainly use their power to oppose anything that comes in the way of their profit margins bigger and bigger. They externalize (that is, don’t count) the cost of degradation of soil, air, water or food or human health and wellbeing in their cost-benefit analysis. The way they operate today has a life and power of its own: much beyond the decision-making power of a single person – even a CEO. Unless people strategically get together, collectively and persistently demand change in multiple regions globally, we might not be able to protect for our children the Great Barrier Reef or other sensitive ecosystems and planetary features (on some of which our life depends).

One effect, a chain of causes: Even if one had ways to take care of institutional causes of climate pollution (for example by putting a high enough price on carbon at a global level that was acceptable to most large corporations and governments in the world), there is another level of complexity that needs to be taken care of: The destruction of Great Barrier Reef is not single-handedly caused by increasing greenhouse gases and the resultant increase in ocean temperature and acidity. For one, water pollution plays a huge role in devastation of coral reefs. Water pollution, in turn, is caused by a multitude of industrial and agricultural chemicals including excessive fertilizers and pesticides. The reason industries are not as regulated as they should be is, once again, because corporations have enormous power over our governments and our global economy. The reason, we the people, don’t end up standing up to powerful and most corrupt corporations is that we find ourselves unable to take collective action. We haven’t necessarily had ways to develop strong and inter-dependent relationships with our neighbors and our ecosystems.  The most privileged of us are consumed and enormously distracted in our quest to live the great (American, Chinese or Indian) middle-class dream of owning bigger houses, bigger cars, more exotic vacations or wardrobes. This quest makes us commute long distances, stress our precious bodies and relationships further and live a life controlled by speed and consumerism. The most unprivileged of us, of course, struggle even more to keep up with several part-time jobs, the ever-present burden of debt and/or lingering psychological trauma of being different (e.g., being native, black, single-mom, LGBTIQ, dalit, suffering from physical and mental health issues, ethnic and religious minority or an immigrant). We, in short, are unable to respond effectively because we are

Same cause, multiple effects? Going back to the Great Barrier Reef: According to Australian government, there are more than 70 Aboriginal and Torres Strait islander indigenous tribes that have long continuing relationships with the Great Barrier Reef region and its natural resources. These tribes likely have an inter-dependent relationship with reef ecosystem. The Reef ecosystem is their relative, their beautiful awe-inspiring home and a source of their food and livelihood. They cause least harm (if any) to the ecosystem but are continuing to suffer the most as it dies. The greenhouse gas emissions, primarily from industrialized regions all over the developed world (but increasingly from rapidly developing countries as well), are not only endangering lives of future human generations but also currently alive less privileged people around the world. The externalization of cost of pollution and destruction of fragile ecosystems and plant and animal species is also intimately connected, in most cases, to externalization of the cost of human life (think about assault weapon laws in the US which mean that people with mental health crisis have easier access to guns than to mental health) and health (physical, psychological and spiritual). This externalization has engulfed millions into an imaginary need for speed and consumer goods or a need for several part-time low paying jobs. Privatization of prisons offers free labor to corporations and allows continued marginalization (read slavery) of black communities. Institutional externalization also makes us exploit resources in other countries. While I am no expert in middle-east situation, our hunger for oil and gas (and crucially the power, privilege and money that it involves) has certainly contributed to the international security quagmire we are in!

The web of interconnected causes and effects includes everything. So, the mainstream climate movement, which has traditionally been led by privileged people in the Unites States, can not stay isolated in our care for the climate. The privileged among us can’t be focused on protecting the rights of future human or more-than-human generations while being indifferent to the pain of beings alive today. That isolation would certainly mean that we have fractured parts of our own selves. The part that that feels love for our human children and grandchildren is torn apart from the part that is connected to and feels compassion towards those on the other side of any kind current of privilege divide (race, caste, gender, economic class, language, physical or mental ability). A spiritual warrior can not but offer their true solidarity and active friendship to those who are not as privileged as we are! In addition, we need a process whereby the current mainstream environmental movement is able to acknowledge its colonial roots and is remade to include those who are most at stake. We (read privileged spiritual warriors) also need to keep healing ourselves. Separating native people from their beloved land, in order to control land resources or people is colonial, unjust, destructive, and divisive. Colonial exploitation must be questioned, but so must our own separation from our ancestral lands and communities. Different kinds of healing is required for different groups of people: Healing means something different for those who maintain ancestral lands, those who have been removed from their homelands and those who do not even understand what interdependence on land means. For some, we need an empowered resurgence of our cultural values. For others, it will mean a sacrifice of their exploitative lifestyle. For still others, we need to learn the meaning of inter-connection to land.**

But what could this friendship across privilege look like? It should be holistic as well as specific, sensible, clever and action-oriented.  While the movement is unified, it has to manifest through single-minded focus on a given issue, person or community at a given time. One can not be wholeheartedly present at too many places at once. What we choose to engage in might depend on what needs attention at a given time or what moves us the most (here is a meditation practice by Bhikkhu bodhi on how to find what is calling us). We also bring unique skills, interests and experience to a given problem: A mother of European descent who is an artist and psychotherapist and lives in an affluent American city in the Midwest brings a different perspective and skillset to the same problem as compared to an aboriginal man living in poverty in Australia or a dalit teenager in India or black single mom working on three part-time jobs in a poor neighborhood in Denver. It is also encouraged that one approach any kind of activism in a framework (see the example of our three pillars framework) that includes focus on 1) individual inner healing and transformation, 2) working to develop compassionate co-intelligent and skilled communities and 3) strategic analysis of the “outer” institutional problems and collective action. As I have pointed out earlier, without a holistic framework that includes balanced work on these three pillars, our sacred activism can easily become lopsided, a part of our ongoing ego-trip or lead to bitterness, exhaustion and isolation with very little joy and actual change.

If you have come thus far, you are already on the move! Welcome to this journey towards one movement! Good luck and thanks for being there. Future and present beings are looking upto you.

*By Kritee Kanko who first heard the phrase “One Movement” in a speech by Benjamin Todd Jealous.  I’m not sure he coined it but want to be sure to be clear that I didn’t coin it.