The calligraphy at the center of the scroll in the photo below can be translated as “Only in Silence.” The scroll was used in a tea ceremony (chaji 茶事 ) on the Pepperdine University campus on Jan. 23, 1993. To commemorate the New Year, the alcove has the requisite old and new willow branches knotted together to symbolize uniting the past with the present. Webb Roshi had arranged for the scroll to be mounted in Kyoto earlier that same year. He and Carol, his wife, hung it in the place-of-honor alcove during the tea gathering, as they often do even now in many different locations. Webb had received the scroll as a gift from the abbot of Han Shan Si, Cold Mountain Temple, in Suzhou, China, around 1980. In the second photograph (below), the abbot, whose dharma name was “Nature-of-Sky” (性空), is shown writing on the rice paper in elegant, vigorous calligraphy. 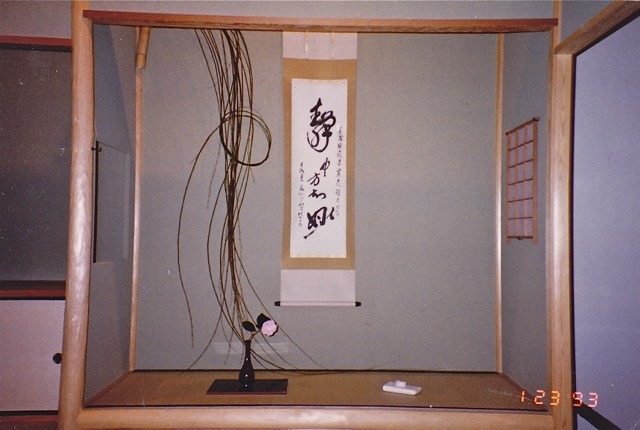 Webb Roshi appears on the lower right in the next photo. After the abbot wrote the big character for “silence” (静), he began to write the next three characters on a smaller scale— the preposition “in” (中), the directional for “wedded to” or simply “only” (方), and then the verb “know” or “known” (知). This was followed by (妙), the final character in the scroll, pronounced “myo” in Japanese (like the yo in “yo-yo” but with the letter “m” in front of it). Nature-of-Sky wrote this last character almost as large as the first one. It means “mysterious, profound, unknowable.” 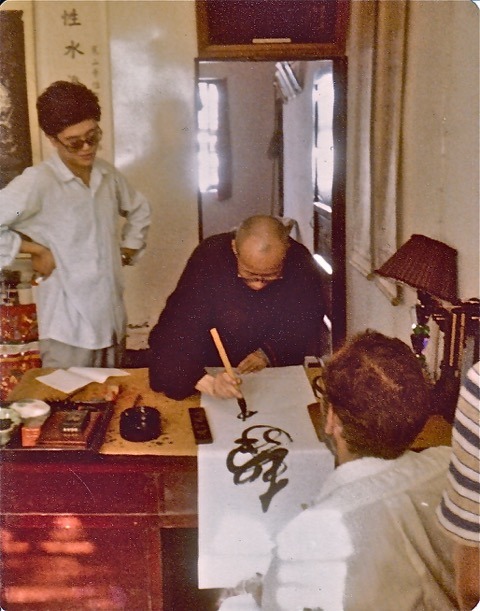 The abbot’s choice of the character (妙) blew my mind at the time because this was the favorite Chinese character of my beloved friend and teacher Daisetsu Sensei (D. T. Suzuki), who called it the most important word Zen students could ever know. I felt like my training was coming full circle. I had been ordained in the Cold Mountain lineage by Miyauchi Kanko Roshi in India in 1970. That was my reason for later visiting the Cold Mountain Temple, founded by Han Shan in Suzhou. So far as I have been able to discern, the phrase “Only in Silence” is original with Nature-of-Sky. But it seemed remarkable to me that he would end with a word Daisetsu Sensei held in such high esteem. Suzuki had taught me that the character 妙 appears in oracle bones from the Shang Dynasty (13th century BCE), and always means something unspeakably profound. It is associated with the mysterious bifurcated animal motif on Shang bronze vessels call t’ao t’ieh. 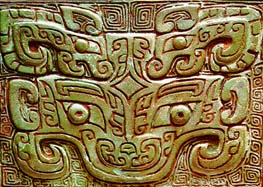 When you read the character 妙 pictographically, it has the radical for woman on the left and for young on the right. When I tried to make something out of that, Daisetsu Sensei just laughed and said I could make of it what I wanted, but whatever I came up with, it had to be both in and out of this world. After completing this gorgeous phrase—‘Only in Silence’–Nature-of-Sky wrote a note on both sides of the scroll, right and left. They essentially confirm my place in the lineage as “Kangan,” a dharma successor to the Tang Dynasty priest-poet Kanzan (Han Shan). The abbot wrote: ‘Today we have been visited by a brother (fellow priest) in this temple of Han Shan, from America. He founded the Tokugan-ji [lit., Temple of Virtue and Rock], and we welcome him to Suzhou and to his patriarch’s temple. We wish him well with these words.’”