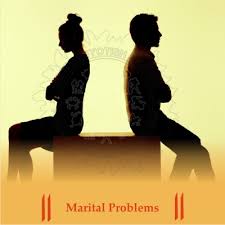 No human being is ever perfect. Only our creator – God or “Universal intelligence” is perfect. Dave Willis views that marriage is a sacred bond between two imperfect people which is made possible by a perfect God and held together with limitless love, unshakable faith and undying devotion for one another.

Is our young generation truly happy and content with married life? There is hardly any need to ponder over this question. Had they been satisfied and content with their married life, the number of divorces would not have consistently augmented; millions of divorce cases won’t have been pending in various courts and another millions of couples won’t have just been carrying/living with the burden of their dying marital relationships. These speechless and wounded marital relations that many of our married couples are forced to live either due to their children or due to fear of society are, as George Hartwell says, ‘silent divorces’?

The causes of these wounded marital relationships point towards an underlying change in the very attitude towards marriage. In the past, there used to be a sense of bonding – a sense of longing for each other – which is now missing. Instead of longing for emotional and psychological bonding between the two, there is sometimes only a seeking for superfluous and material happiness or logistical comfort. The other day, one of my old acquaintances asked me whether I knew a Hindu family which had only one (marriageable) son. She further elaborated, “I want to arrange marriage of my daughter with the boy who is the only son of his parents so that she does not have to share the parental property with anyone else”. Well, I was just speechless. Like millions of other aspirants, she also was looking for her daughter’s happiness in property, in the wealth of her in-laws and not in their psychological and emotional maturity and compatibility in their tastes, habits, values, attitudes, preferences, prejudices, personality makeup, ambitions, aspirations and most importantly what they expected from the mutual relationship. If all these considerations are missing, how can we ever think of marital bonding?

Emotional bonding is most important to attain conjugal success. But this bonding does not come our way without asking the right questions and trying whole heartedly. We have to put all our emotional efforts and also communicate the same to each other, taking care of each other, feeling for each other, sacrificing for each other, reciprocating the bonding sentiments to each other empathically. Empathy is the underpinning that results in lasting marital bonding between the spouses.

“Marriage is a partnership between two married partners which flourish on qualities like love, trust, mutual regard, sympathy, loyalty, devotion  and patience,  But the modern era marriages which only strive for individual happiness, self goals and self centered desires & aspirations are devoid of quality bonding between spouses. Marriage is an ultimate bond between two partners, and hence its very importance to keep up the promise of ‘Till death do us apart’ that the couples made while they got married, to achieve and win an everlasting strong marital bond (Tenginkai et.al, 2017).

Many psychological factors are responsible for these wounded & dying relationships between the couples. Why it is that even the so-called ‘love marriages’ not only lose their very charm and appeal just after sometime and turn into unspeakable silent divorces? Family counselor George Hartman, while throwing light on these wounded and speechless silent divorces, opines that there are many reasons due to which love/attraction turns into a bitter relationship. Some of these reasons include the differences in their personality make up, attitudes, values & interests and habit patterns. But in addition to these, when the self-respect and self-esteem of anyone of the partners is consistently hurt, no relation can stay healthy for a long time.

Whereas convivial relationship between spouses is an indication of sweet and positive bond between them, it is also true that non-cordial or unfriendly relation can be the indicator as well as the result of some unnatural and undesirable control over each other for a long period. It is not surprising that this constant strife and an urge to have control over each other can itself be the most difficult and troubling aspect of any marriage. So, before looking for the measures to improve the relationship, it would be better if you could try to assess your relationship in terms of health of marital bond between you two by filling this survey.