All of us want our kids to be confident & self-reliant. But do we really teach them self-reliance and let them grow into full-fledged autonomous, self-confident and self-reliant persons, stand on their own feet, take their decisions and feel accountable for their deeds? Perhaps not! Because we, especially the South Asian parents, get pleasure in doing every bit for our growing kids & teenagers from providing food to taking care of their daily needs and routine, studies, home-task, managing their success in exams, settling them in job or business, marrying them and even rearing their kids. In so doing, we forget:

“To make our children successful in life, it is not significant what we do for them but what we teach them to do for themselves”

To be precise, ‘dependence’ can take diverse forms depending on the mutual interactions of our parenting styles and the nature, temperament and personality makeup of our children.

Various parenting styles: Parenting expert Siegler defined Parenting styles as “Parenting behaviors and attitudes that set the emotional climate with regard to parent-child interactions & relationships. Parents can either be responsive, supportive, and accepting or unresponsive, unsupportive, and non-accepting or rejecting. Similarly parents can be highly controlling or demanding type as well as very un-controlling or un-demanding type. 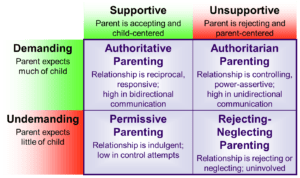 Thus, we can categorize the parent-child relationship & interactions into two major dimensions in terms of parental ‘responsiveness’ and ‘demandingness’ or ‘supportiveness and control’:

1. Responsive v s Unresponsive: Supportive, accepting and child centered parents v s ‘unsupportive and rejecting parents’. Responsiveness is the degree to which a parent responds and molds her dealings in response to her kid’s needs. Highly responsiveness parents are highly supportive, warm & accepting. They change very promptly according to their kid’s needs. The opposite is true in case of least responsive parents. They wouldn’t budge an inch in response to their kid’s needs and emotions whatever the situation might be.

2. Demanding v s Undemanding (expecting much v s expecting very little) from the child: Demandingness is how much a parent expects of her child and how much control they employ to ensure that they meet their expectations. They’re immensely controlling and never budge from their demands.

Authoritative Parents: These parents are supportive, child-centered & responsive to the needs, interest & demands of their kids, but they’re highly demanding also. Their relationship is mutual. They accept the individuality of the child, try to give them all the facilities and provide maximum openings for their growth & development. However, they have high expectations and demands from them. They give them freedom to grow into independent adults but they also want their kids to fulfill their expectations. They control their behaviour by fixing certain family standards and values.
Permissive Parents: They’re supportive but undemanding and un-controlling. Their relationship is child centered, lenient & generous. They’re non-judgmental and empathic. Their teenagers are expected to be full fledging autonomous individuals beaming with confidence.
Authoritarian Parents: They’re parent-centered, power-assertive, unsupportive & unresponsive, highly demanding and controlling type. They set unachievable goals for their kids but provide nil support in attaining them. They aren’t warm or receptive. So, the kids feel highly burdened and suppressed.
Rejecting and ignoring Parents: They are neither supportive and responsive nor demanding. They don’t bother about their kid’s biological & psycho-social needs and wishes. They are totally rejecting and treat their kids in very casual way. Whenever their kids approach them, they are ignored, scolded or pushed away.
Protective Parents: In addition, we come across another important category of parents who try to control their kids not out of their authoritarian attitude but due to their own insecurity and little faith in their kids loving but fully controlling They don’t trust the capability of their kids to do anything on their own. Even when kids are grown up, they hardly allow them to do anything by themselves, e.g. feeding, dressing, home work or going somewhere.

Self-reliance or dependence is directly related to parental style. All the parenting styles except the ‘authoritative parenting’ produce diverse dependency/contingency level in their growing children. Child Psychologist and Parenting expert Dr. Richfield explained five different patterns of dependency among growing kids corresponding to their parenting styles and their own temperament. These are:

Pleasers/compliants: Such kids do everything they can to get the love and attention they crave. They are often perceived as model children who are successful as well as unusually obedient to the parents or authority figures. But, while pleasing others, they often neglect their own needs and hence remain discontented, resentful, and dejected.
Dear parents, try to realize that it’s a kind of slavery for a child to attract the focus of authority figures towards her. Ask yourself, ‘whether they do this on their own sweet will or due to their parental pressure? It’s true that we must bother about other’s happiness, but not at the cost of our own values, objectives, self-respect, thinking and attitudes but never due to fear of any kind.
Disappointers/frustrators: They cause tremendous frustration to their parents. They’re low achievers and never perform up to their own potentials & expectations. Despite their high I Q, they rarely accomplish anything major in their lives. Due to their parent’s undue pressure to achieve more & more, these kids degrade themselves deliberately and try to ease the pressure from their authoritarian parents by simply not trying anything.

Friends, you won’t like to see your teenagers live their lives without self-respect and dignity and purposely shun their parent’s hopes and harm themselves avoiding the achievement activity or by putting fewer efforts or even adopting problem behavior like criminal misconduct / drug use
.
Reactors: Parents may interpret their kid’s behavior as ‘independent’. Infact, they highly depend
on their parents, though, in a paradoxical way. They feel controlled by their parents and feel helpless in directly asserting themselves against their control. So, instead of taking any initiative, they wait to see what their parents want them to do and then just do the opposite. They derive extra pleasure in doing against their parents’ wish as a protest against some injustice done to them in their childhood. This irritant behavior may surface in the form of poor grades, non-conformist dress, “unacceptable” peer relations or alcohol or drug abuse. I’m sure; no one would ever want your youngster to become a protester like this. So please start treating him as a friend instead of exercising undue authority over him.

Rejecters/Revolters: They’re viewed as the most healthy and adaptive of all the dependent kids as they chose to separate them from their parents and become autonomous and self-directed people. They reject their parents’ authority and expectations and choose a course of their own. Rejecters don’t simply react by choosing the opposite. They rather purposely reject the parents’ offer and pay a heavy price for this extreme step by spoiling their relations with their parents.

So, kindly treat your growing kids with patience, conviction and without demonstrating the obligation of your power/status. Remember that autonomy isn’t a trait the kids can develop themselves; for they neither have any experience & skill nor opportunities & perspective for the same. It is you who have to develop their sense of self-determination.
We shall discuss various ways of cultivating autonomy in our next issue.