Quite often, our kids, youngsters and even the adults, face quite a difficulty in saying ‘no’ to the wrong, illegal and seemingly bad requests or offers; due to which they end up in some serious trouble or become the victims of self-killing or/and antisocial habits and put themselves and others in great trouble. To save our youngsters from this, we should teach them to say “No” (the refusal skills). 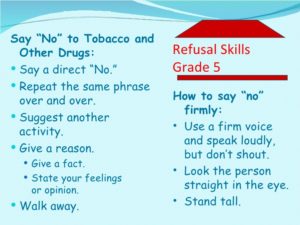 The refusal skill workshops are meant for protecting and discouraging the youngsters from indulging in illegal, unjust, high risk acts or socially undesirable behaviors or activities. They are taught and given practice in refusing and saying ‘no’ to the undesirable and antisocial requests or offers; so that they are helped in resisting the pressure of undue requests from their peers, class-fellows or colleagues while maintaining their self-respect.

These refusal skills not only enable the participants, especially the youngsters to decide their own limits and resist undue external pressure by learning to say ‘no’ but also enhance their self-respect and self-esteem. Besides, they also empower them to refuse to participate or indulge in anti-social activities by learning variety of striking and feasible methods to refuse undue requests or offers.

Some important tips for teaching refusing or (Saying “No”) skills:
The Teacher/counsellor would Instruct the participants/students to give their alternate choices for day-to-day activities. (Teacher/counsellor or parent should mark their choices and comments to the following questions on the board or paper; for example: “would they like to——?
• Be truthful or tell lies;
• Follow rules or break them;
• Respect the parents, elders and teachers or insult them;
• Help the poor, helpless and the destitute or torture them;
• Protect women and girl-children’s honor or abuse them;
• Have nutritious or junk food;
• Clean the surroundings or make it dirty;
• Listen to the teachers while they teach or indulge in talking;
• Finish home-task or leave it incomplete;
• Be friendly to the poor and helpless or ignoring them;
• Save national property or destroy it;
• Abstain from smoking or taking drugs & wine or become their addict; etc.

Another way is to ask the children to write about a few events when some of their friends would have asked them to indulge in the activities or behaviors not acceptable to them and which could have placed them or others in some great trouble; like:

Telling lie to the teachers/parents/friends;
Stealing family or other’s things or money; cheating others;
Teasing or threatening others or doing some hazardous tricks.

They can also ask the youngsters about the best way to keep themselves secure and out of trouble. Tell them that the best workable way is to refuse or say ‘No’ to the wrong & hazardous requests and offers. Being a teacher/parent, we should make them realize that if they feel even slightly uncomfortable about some request or offer from someone, they need to stop, think and ponder over the consequence of doing some wrong or unlawful acts or behavior.

If someone wants to do some wrong or something that can put them in some serious problem; they should resist it with full vigor; like, if someone wants to fight with you, looking straight into his eyes, you tell him firmly:
“No, I’m not willing to fight/quarrel with you.”
Likewise, they can follow some other practical ways to say ‘No’, like:

“No, sorry, I can’t give you money right now;” or
“No, thanks, I don’t smoke or drink” or “No, I won’t take drugs”; or
“I won’t involve in any wrong/unlawful/anti-social activities”;
“You may call it anything, but it is pure cheating, I won’t ever join you in this.

You can also divert his attention by altogether changing the topic, like:
“It was really great”, or “Let’s see, what is being done there?”
Do, you know, a new student/teacher joined today?”

Give any solid reason, like:
“I don’t want to invite/buy a problem.”; “I think differently”; “I hate such cheap-tactics.”

Suggest something positive, like:
Let’s play some game.” or “Let’s watch a movie.” Or “Let’s go for a long walk”;

You can even appeal to their emotions, like:
“If you force me, that drug/wine/tobacco would kill my very soul.”
“Oh! I’d be doomed forever, if ever I happen to do this!”

Keep your doors always open (if you don’t want a break-up) by offering:
“Please don’t forget to inform me, if at all, you plan to do some good, positive and safe; I shall surely join you.” Or
“If you want to play some indoor-game, I’m at home only.”

It’s always better to quit and leave the place if it is really impossible to ignore or refuse their unlawful/bad request/offer.

Role-Playing: Since, the Role-play involves the teacher/counsellor and the students both, the former are in the best position to have durable impact on the minds of the later. While playing any role with the youngsters, the teacher/counsellor or the parent should always play the negative role. But yeah, the students/youngsters ought to have the faith that their mentors are only playing a role and that they can’t ever think of doing the same in their real lives.

So, before playing any role, the teacher/counsellor instructs the youngsters quite emphatically, “We would be playing only imaginary roles of bad/good guys. I would be playing the bad guy’s role. But, in real life, I never want you to ever indulge in the activities or behavior, I ask you to do here in my role of a bad guy”.

Role-Play 1. She calls Preeti and Ankit for the role and asks Preeti to fetch a glass of water for her. After she leaves, the teacher (in another bad guy’s role) proposes:
Teacher: “Ankit, let’s chase Preeti and pull her scarf/skirt”.
Ankit: “No, It’s very unethical”.
Teacher: “Come on, it’s just a fun and nobody is watching you”.
Ankit: “No, my mom has taught me to respect the girls”.
Teacher: Praising Ankit for his good values, asks the whole class to clap for him.

Role-Play 2.Teacher: “You are friends. I am also your class-mate. I have called you here to have some fun. I have a few interesting items, you may like to enjoy”.
Shravan: “What’s that?”
Teacher: “It’s not named. But, you can still taste it.”
Raman: “Why argue on name? Come on, let’s taste it.”
Shravan: “No, it seems some drug-like thing. I won’t taste anything unless I know it.
Raman: Yes, you’re right. Even my dad dissuaded me to accept any unknown thing from anyone.
Teacher praises Shravan for his emphatic refusal and also dissuading Raman for tasting it.

Role-Play 3. Teacher calls two new guys and explains the theme: “If your classmate/friend asks you to steal money from someone’s bag/desk/cupboard; what will you do? I will play that guy’s role.”
Teacher: Hey! I just noticed Renu putting big amount of money in her bag. She’s gone. Let’s steal her money and enjoy a movie instead. She won’t ever know as to who stole her money.”
Puneet: “No, stealing is immoral.”
Sunil: I, too, never steal. If ever I do, I won’t be able to forgive myself.”
The teacher applauds both the guys for resisting and refusing the wrong proposal and asks the class to clap for their honesty and guts to refuse.

Role-Play 4. Teacher has taken some students on picnic. They are all involved in playing some game when some guy in dirty, torn-out clothes, tries to peep into. The teacher avails this chance and plays a bad guy role as under:
Teacher: “Hey guys! Did you notice this guy with dirty looks interested in joining us? We won’t let him play with us.”
Rajat: “Why? I don’t see any harm in playing with such guys. I shall play with him, as we don’t have any right to isolate anyone due to his poor dress or looks.”
The teacher appreciates Rajat for his humane approach and asks the entire group to clap for him.

Likewise, the teacher/counsellor can play different roles to cover some other crucial issues like drinking, cheating, bullying, eve-teasing; gossiping in-between class etc. and teach them say “No” emphatically.

Similarly, parents can also teach their kids say ‘No’ to any wrong request and offer by playing different roles. They should not only give them practice in playing positive roles alone, but also appreciate and cheer them in front of their friends and peers. By learning refusal skills, they would not only save themselves and others from impeding dangers but also gain self-esteem, enhance confidence and become worthy citizens.