We generally come across many bullying situations like threatening other children, forcing them to obey their orders by exploiting them, asking them to perform wrong, anti-social and illegal acts; and/or controlling them – their actions and social relations. They exclude their peers by saying, “Don’t let her play,” or settle some scores by saying, “She was rude to me yesterday, so she can’t be our friend.” In older guys, the chitchat can be even nastier, e.g. “I saw her cheating” or “She’s a shoplifter” or “If you don’t obey me, I shall tell the teacher that you steal things”.

Have we ever pondered over as to why some children behave this way? What age group of our children indulges in such behaviour; how does this affect the victims or exploited children? How catastrophic can such behaviour prove to be? What could be the end-result of such bullies persona, attitude and thinking in their young age? What kind of citizens they would prove to be for their society and the country? Who, after-all, is responsible for their bullying acts?

Surely, all these bullying acts can be categorized as ‘Relational Aggression’. Relational aggression or bullying can be defined as, ‘Any action that inflicts mental harm upon their peers’. Thus, it can be termed as ‘A calculated manipulation to injure and control another child’s ability to maintain bond with his/her peers. Some guys begin to indulge in bullying behaviour right from their early childhood. It’s also seen that while the boys harm others physically; the girls, quite often, inflict harm on their relations or emotions; e g, a relational aggressive girl may persist that her friends overlook a specific child, bar her from their groups; form secret deals to debase the child, call her names, and/or spread rumors about her/him or exclude her from all their group activities etc. In Leah Davies views also, ‘The girls usually differ from boys in the type of aggressive behaviour they exhibit. While boys tend to inflict bodily pain, girls most often engage in covert or relational aggression. Girls tend to value intimate bonding with girls, while boys usually form social bonds through group activities.’

The common signs of bullying or mean behaviour

Aggressive guys often gain power by withholding their friendship or sabotaging the relationships of others. Quite often, subtle, nonverbal message of an aggressive girl is very obvious, for example, she may roll her eyes, frown, ignore, turn away, point at, or pass notes to a friend about the rejected child. 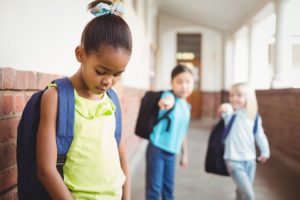 Psychologists view that all the members of the ‘Relational Aggressive Groups’ have a strong and intimate bonding with one another and they also know the secrets of one another. Hence, they take care of and cooperate with one another. But the same intimacy, many a times, may also jeopardize the lives of the followers, because the aggressive guy knows all the inner secrets of each member. More than that, they are afraid of the fact as to whom they would go for help, if at all they are excluded from that group, because they do not have any other friend to interact with and anywhere else to go. So, they keep on yielding to their orders for fear of being left alone.

It is also observed that the pressure of being compliant is always there. And therefore, they dare not give lukewarm look. They can’t express their feelings directly but their displeasure and anger continues which is expressed indirectly.

Hence, it is essential for the parents/teachers to realize that the habit of indulging in relational aggression can make their kids’ relations to be problematic for their whole life. It is therefore essential that they are given proper intervention and guidance. Because aggressive guys do possess leadership qualities but they need elder’s guidance to channelize this leadership quality into positive direction.

Consequence of bullying/relational aggression among children:

Bullied kids also have to face many adjustment problems, like:

Why kids tolerate bullying behaviour from their peers?

Why peer relations are important?

How can school staff deal with the ill effects of bullying kids and their victims?